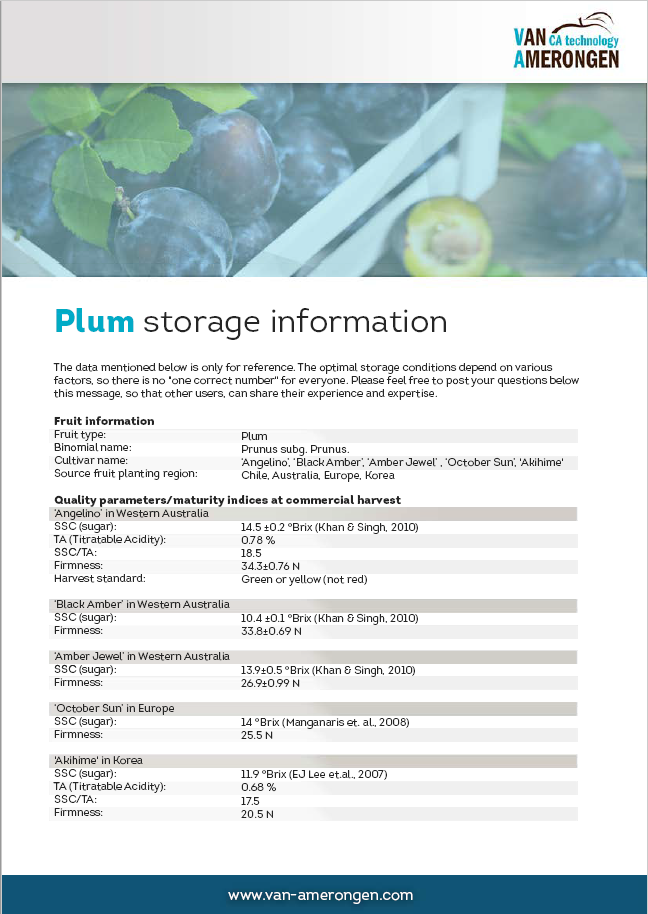 The period to keep plums fresh is limited. They can be stored around the freezing point, at the highest possible relative humidity. Controlled Atmosphere has positive effects on the storability of plumss; lowering the oxygen content to a level of 1 to 3% increases the retention of firmness. Too low oxygen concentrations (<1%) may lead to taste defects and pitting. Plums respond positively to an increased carbon dioxide content (5-8%)t; less rotting occurs and the fruit keeps a fresher, better appearance.

The susceptibility to Chilling Injury (CI) s variable and dependent on the cultivar considered. But most plum cultivars are susceptible to CO symptoms when stored at 2-8 degrees.

Plums are often stored in plastic hoses, in which the air composition is controlled with a controlled atmosphere system (Palliflex). Up to 400 pallets can be controlled separately with a single control system; air compostion per pallet can be managed, which offers great advantages for the storage of all types of soft fruit.

Controlled atmosphere storage is also applied during transportation of cherries, particularly in long-distance.

Our solutions for plum storage:

Questions about our solutions for plum storage? Free advice on which solutions are suitable for your situation? Contact us for a free consultation!

Thank you for your message

We are required to inform you about and request your permission for the use of cookies on our website.

Marketing cookies are used to track users through multiple sites. This allows the interests of a user to be used for showing relevant advertisements. These cookies are of value to third parties

Because of the way in which the internet and websites work, it may be that we do not always have insight into the cookies that third parties place via our website. This is especially the case if our web pages contain such embedded elements; these are texts, documents, pictures or films that are stored with another party, but which are shown on, in or via our website.

Should you encounter cookies on this website that fall into this category and that we have not mentioned above, please let us know. Or contact the third party directly and ask which cookies they put, what the reason is, what the lifespan of the cookie is and how they have guaranteed your privacy.